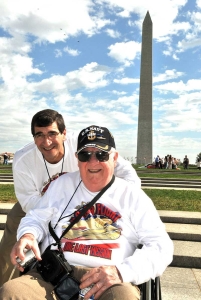 Rick Deneweth, a Cherryland board member, and Rachel Johnson, the co-op’s grassroots advocate/member services manager, recently served as guardians on an “Honor Flight” to Washington, D.C., for WWII and Korean War veterans.

“Our Flight took 62 veterans to visit the WWII and Korean War memorials, Air Force and Marine Corps monuments, and Arlington Cemetery,” Johnson explains. “As guardians, Rick and I were each assigned to a veteran and our job was to do everything that veteran needed. We helped push them in wheelchairs, kept them hydrated and fed, and provided an ear for their stories and memories.”

Deneweth assisted a Navy veteran named Dewey, who served in WWII and the Korean War. Johnson accompanied a Marine named Walter, who served in the Pacific Theatre for four years and fought on four islands, including Guadalcanal and Iwo Jima. 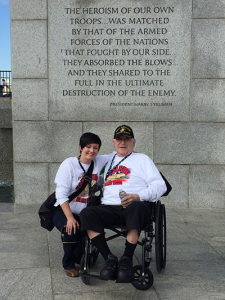 “It was a true honor to travel with Walter and share this experience with him,” Johnson notes. “Everywhere we stopped, people went out of their way to thank all of the vets on the trip. It was a really emotional day and one I won’t soon forget.”

Deneweth got involved with this volunteer opportunity through his son’s hockey team. For two years, the Bay Reps (a consolidated team from local schools) and Traverse City Central have played a benefit game for veterans. Last year, they donated the proceeds to the Honor Flight program, and afterwards their staff asked Deneweth to be a guardian. “We raised $10,000 for the Flight, and this year, we’ll do better,” Deneweth says. All guardians also make a donation to the Honor Flight.

“Meeting some of these guys was ‘over the top,’” Deneweth agrees. “They are so humble and awesome, and many have difficult health issues, yet are so impressive…they are down-to-earth, quality people.” Some of the veterans volunteered as young as age 15, and many were just 16 or 17.

Local community support for the Flight was also strong. There was a crowd to see them off at the Traverse City Airport and greet them as they returned. “The highlight of this trip was that so many people, both young and old, were thanking these guys for their service,” Deneweth adds.

“You have to realize what it takes to organize this event, with 62 veterans, plus guardians, volunteer medics and staff behind the scenes,” Deneweth says. “It’s all volunteers, and the trip is all done in one 18-hour day.”

Click here to learn more about the Honor Flight program.