No one invited winter storms Dorothy and Ezekiel to Thanksgiving, but they showed up anyway—leaving hundreds of thousands without power over the holiday.

While others were busy planning a holiday feast, MECA safety director and mutual aid coordinator, Joe McElroy, was keeping a close eye on the weather forecast. “Holidays and widespread storm outages seem to go hand-in-hand these days,” McElroy said. 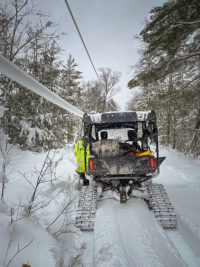 Winter storm Dorothy arrived that Wednesday, bringing wet snow (nearly 24 inches in the U.P.) and 40 MPH winds. On Thanksgiving day, more than 325,000 homes and businesses in the Great Lakes region were left without power.

“The moisture content in the snow was as high as they have ever seen it,” said McElroy. “It froze to the lines and the trees.”

Mutual aid crews were assigned, and restoration was underway on Friday when winter storm Ezekiel showed up.

“We were down to just 40 restorations when the second storm hit,” said Troy Tiernan, operations manager at Alger Delta Cooperative. “It left nearly half our membership without power.” 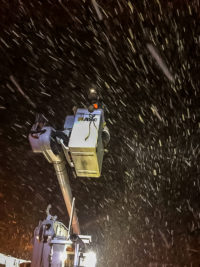 In the U.P., winter storm Ezekiel brought another 28 inches of snow and whiteout conditions. “The roads were so bad that our crews were getting stuck, said Tiernan. “In some cases, the snow made it impossible to even get to the outage site.” Tiernan described the event as a historic storm for Alger Delta.

MECA exhausted all measures to help members bring the power back on as soon as possible. By Wednesday Dec. 4—a full week after the first storm began—power was finally restored to all members.

“It was the worst storm I’ve ever managed,” said McElroy. “It was call after call, text after text, voicemail after voicemail. The logistics were intense.” 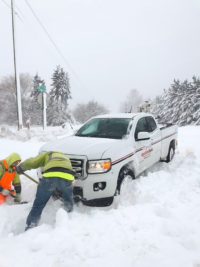 Restoring power in this type of event requires a tremendous amount of team effort. And, with the Christmas holiday right around the corner, you can bet McElroy and the mutual aid partners are monitoring the weather closely.