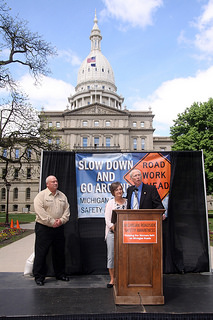 As Michigan motorists prepared to hit the road for Memorial Day, utilities and others working alongside those roads are reminding drivers to slow down in utility work zones.

Over 12 utilities, telecommunications providers, waste haulers and the unions that support them, along with Gov. Rick Snyder, legislators, Michigan Department of Transportation (MDOT), and the Michigan Public Service Commission partnered to promote the need to “Slow Down and Go Around” at an event held at the Capitol, May 22.

Joe McElroy, safety and loss control director for the Michigan Electric Cooperative Association (MECA) spoke at the event on behalf of electric co-ops, along with other utility safety experts. Also demonstrating support for roadside worker safety efforts was Robin Creel, widow of Consumers Energy journeyman lineworker Jeff Creel, who was struck and killed by a vehicle while responding to a downed line report in 2012.

As Creel and others looked on, MDOT Director Kirk Steudle presented a proclamation declaring May 22, 2014, as Michigan Roadside Safety Awareness Day. Among state lawmakers present in support of resolutions endorsing the safety effort were Sens. Bruce Caswell and Mike Nofs, and Reps. Rick Outman, Ken Kurtz and Aric Nesbitt.

A large contingent of vehicles, ranging from electric bucket trucks, a gas “sniffer” truck, and others often found in roadways were displayed at the event, with their safety lights flashing.

In 2013, there were 4,080 construction zone and utility related crashes in Michigan, 10 of which were fatalities, and 107 serious injuries. Public Acts 103, 315 and 464 all related to driving safely in roadway work zones, and provide severe penalties for not respecting them.

“Roadside safety awareness starts with us,” McElroy told the crowd. “We have the obligation to let the public know we are working in and around the road. Where applicable, we need to let motorists and pedestrians know that they are entering a ‘work zone’. Orange signs, cones and amber lights should be enough for people to understand that they are approaching an active worksite.”

“But even with all of the proper safety equipment in place, incidents still happen,” McElroy said. As a former lineworker, he recalled being on a worksite where the crew had setup a proper work zone, with all advance warning signs in place, but an accident almost occurred. As to not impede traffic, orange cones were placed closely to the bucket truck, and one was actually on the truck’s outrigger/stabilizer. While the linemen were working aloft on 7,200 volts, a distracted driver veered and knocked the cone off the outrigger. If the driver had not corrected his path, the result could have been devastating. “I could only imagine the effect it would have had if he crashed into the back of the bucket truck,” McElroy said.

Lineworkers are also currently telling McElory that distracted drivers are getting worse, and it seems like incidents happen every week.