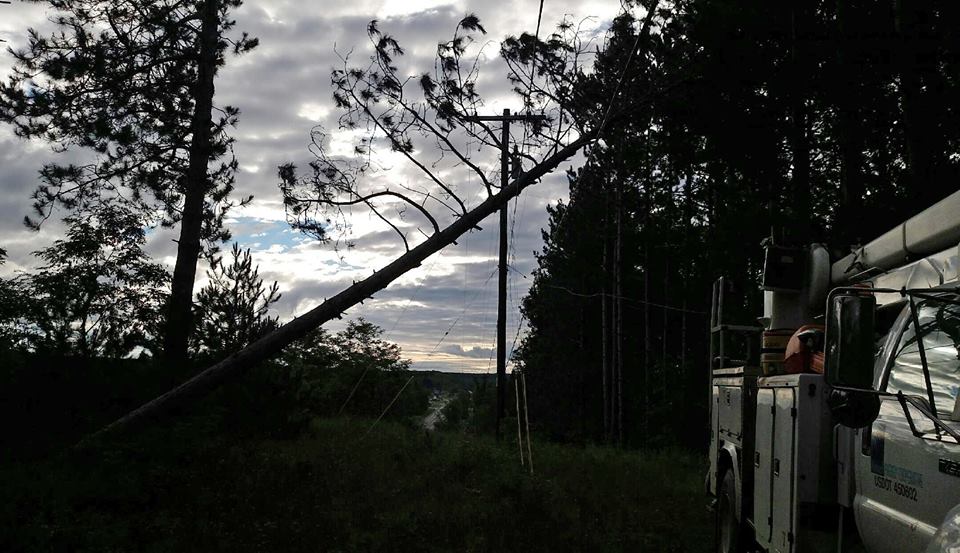 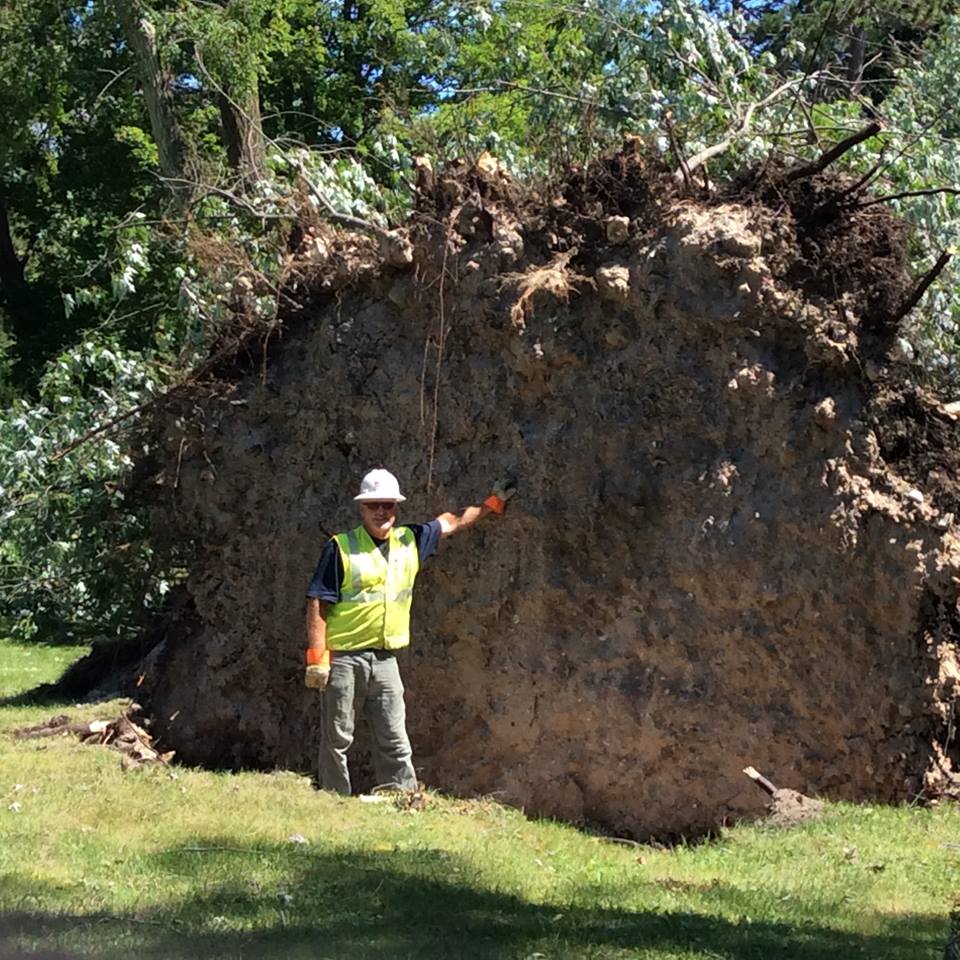 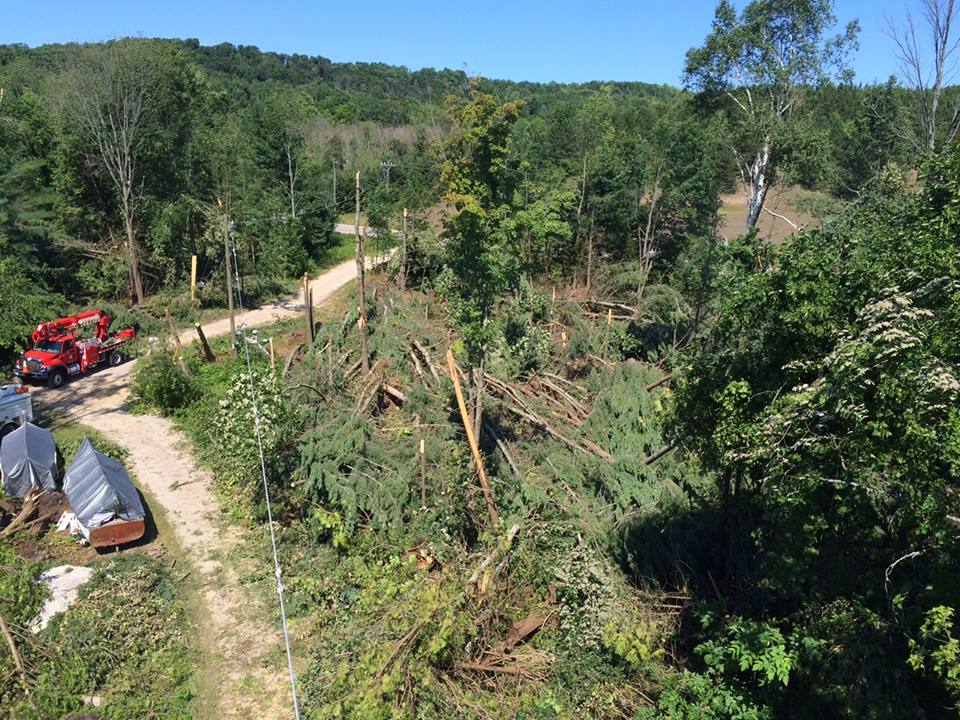 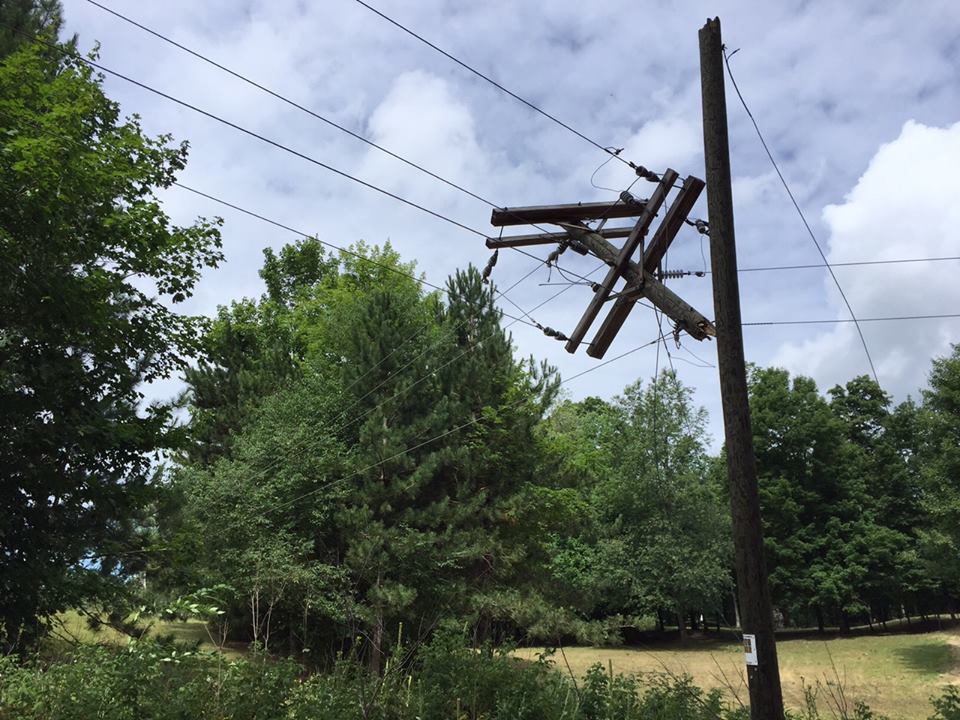 A tornado touchdown and powerful thunderstorms with high winds damaged the power lines and areas served by nearly all nine electric co-ops and many municipal utilities on Aug. 2.

“This storm, much like those from 2012 and 2013, was ‘all-in’, meaning almost every co-op and municipal that the MECA Safety team serves were affected in some way,” reports Joe McElroy, safety director for the Michigan Electric Cooperative Association (MECA).

All three counties (Huron, Tuscola, Sanilac) served by Thumb Electric Cooperative were affected. Huron was hit hardest, with an EF-1 tornado touching down at Owendale – only about 19 miles from the co-op’s office in Ubly. As wide as a football field, it traveled 7 miles and stayed on the ground about 5 minutes – long enough to tear the roof from a local business, damage a school, and more. Just north of the co-op, high winds also took down at least six barns, and caused more outages that ran nearly all the way around the Thumb’s shoreline, from Harbor Beach to Unionville. The co-op’s office wasn’t damaged, but employees handled 3,381 outages.

Areas suffering the most widespread damage, however, were those served by Cherryland (12,000 outages) and Great Lakes Energy (40,500). At Cherryland, major devastation was reported around Traverse City, with 70-mile-an-hour winds clocked across the entire Cherryland and Traverse City Light & Power (600) service areas.

For Great Lakes, members in all 26 counties served by the co-op were affected. The destruction included a right-of-way section that was buried by big trees piled at least 15 feet high, reports Dave Guzniczak, communications director. Crawford and Kalkaska counties were trampled the most, and some areas may not have power restored until at least Aug. 8. With the help of 58 extra crews, including 23 tree-trimming crews, Great Lakes is fixing over 208 broken poles.

Other co-ops and utilities with outages included HomeWorks (660), Midwest (1,200+), Presque Isle Electric & Gas (6,277), and at least 13 of the 18 municipal utilities served by the MECA Safety team. Presque Isle reported outages in nearly all of its nine counties, with Cheboygan and Montmorency hit hardest (10 broken poles). Cloverland and Ontonagon did not have any reported outages, and Alger Delta had only about 200.

As the storm swept most of the Lower Peninsula, McElroy alerted crews in Indiana and Ohio, but didn’t have to call them for help. “Working closely with the Ohio and Indiana statewide associations on mutual aid gives some comfort, but they too were affected by this system,” he said.

McElroy is very pleased with how successful mutual aid efforts were between the electric co-ops and municipals, and credited much of it to the use of mutual aid coordinators. “Communication between the Michigan Municipal Electric Association mutual aid coordinators and MECA was very strong,” McElroy reports. “In some cases, we diverted municipal help away from other municipals to co-ops because of this communication and cooperation.”

With good timing, the mutual aid coordinators had just met on July 29 in Traverse City to discuss communication plans for a statewide event. “We had just run through a scenario where all of us got hit and then it happens!” McElroy said. “Within this meeting, the coordinators also reviewed the recent tornado that affected HomeWorks Tri-County and the City of Portland.” The coordinators and McElroy fine-tuned the process and put it into play Sunday and Monday.

“Communicating closely about when the co-ops and munis could help others was key,” he said. It saved time and money getting crews in since they were not being paid to drive to an area only to find that help wasn’t needed after all. “‘Call early and call often’ to let us know what you need is our motto for both the co-ops and munis,” he adds. MECA is also test-piloting a new computer program, called Veracity, that is helping coordination and communication efforts.

Most importantly, at deadline time for this story, no major injuries were reported among employees.

Cherryland’s Facebook page proved to be an instrumental tool for member communication during the outage, receiving over 2,500 comments this week!…..Check it out